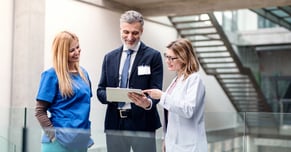 I recently returned from the ASCA 2022 Conference & Expo where I had the good fortune to present on "The Tech-Enabled ASC: How Innovation Can Keep ASCs Competitive and Viable." A big thank you to everyone who attended! During and following my presentation, there were great questions and conversations about the topics I covered. I want to highlight three areas of technology that generated some the biggest buzz and interest.

The energy of the room picked up when we discussed radio-frequency identification (RFID). RFID has been around a really long time. It received significant attention years ago because of the movement to improve surgical counting in the operating room and eliminate this manual process by adding RFID tags to those items that needed to be counted — e.g., sponges, sharps, instruments.

During my presentation, much of the RFID energy was around its applications for materials management. There is no international standard for barcoding. Everybody supposedly should be using GTIN, but there's one big problem: GTIN is not accepted worldwide. However, there is an international standard for RFID, and the information that is in RFID can be customized based on what the user needs.

When a pallet of supplies with RFID tags attached arrives, you can wave a wand over that pallet and immediately know everything that's on that pallet. The information is downloaded and automatically entered into an inventory management system. There's no longer a need to pull each item off and hit it with a barcode scanner. Even then, it's typical to see many of those barcodes fail to work correctly.

There's also increased interest in leveraging RFID for patient tracking. A big reason is that RFID technology is getting cheaper. As costs become more manageable, ASCs see this as a more reasonable investment. For patient tracking, it's just a matter of adding an RFID tag to a wristband. Then you know exactly where and when all patients are moving throughout your center. With this information, you perform time studies a lot easier. You can see where you experience bottlenecks and inefficiencies and then identify opportunities for improvement.

That same system is now being used to monitor assets — your equipment and supplies. If you're wondering where a C-arm is, you can just pull up a screen and find its location thanks to the RFID tag attached to that C-arm. Now you know exactly where to go instead of doing loops around the surgery center until you see it. RFID technology can also make it easier to manage equipment you may share with another surgery center or hospital.

Where RFID costs have come down is in the receivers. The RFID tag itself does not have any power to it. It doesn't emit a signal. The tag just sits there dormant until a receiver activates it. Those receivers are put into the ceiling throughout a surgery center so that it can track the movements of anything that has an RFID tag attached to it, like a patient or asset.

RFID technology has the potential to be a significant difference maker. During my session, I got to tell the story about one of the surgery centers I worked for that had its hospital partner fund the use of an RFID patient tracking system. At the time, it was well over $100,000 worth of infrastructure that had to be built for the system to work.

That's a lot of money but let me tell you: It was glorious. I never had to do a manual time study again. As many in the audience knew, those are when you sit in a room and hit a stopwatch to see how long it takes for someone to perform a process like retrieve a supply, register a patient, and travel from preop to the OR. With the RFID tracking system, that work was eliminated. All I needed to do for time studies was the reporting and analysis, which was awesome.

A lot of the attendees were interested to see where RFID is going to go and how they can use it more. We're already seeing reliance upon RFID grow in the retail market, and it's being driven by some major retailers like Walmart and Amazon. That's how they're managing their inventory over use of barcodes.

We're starting to see that make its way into medical supplies as well. The more pressure that hospital systems, which are the big buyers for supplies, put on manufacturers and vendors to incorporate RFID, the sooner we'll be able to see that become commonplace and perhaps a standard. The one problem we have now is when I receive supplies, if they don't have an embedded RFID tag, then you need to go tag everything manually. When that happens, you use up much if not all the time you had hoped to save with RFID tagging in the first place.

Artificial intelligence (AI) got people talking as well. I spent some time discussing how there are a lot of systems out there describing themselves as artificial intelligence, but they're actually not AI. They're complex algorithms that people have built. It's not truly "learning" software.

What's the difference? If I have a complex algorithm, it can process a massive data dump. The biggest use we're seeing for this technology is denials and claims management. When I dump all the data into a complex algorithm, it can look through it and find the problem causing an increase in denials. With this information, you now have the opportunity to look into the problem and determine a way to fix it. And once you determine that fix, then you go back and fix everything. The complex algorithm helps find the issue but requires you to manually determine and execute the solution.

Artificial intelligence not only discovers the problem but applies the fix as well. We're excited about the possibilities that gives us for denials and claims management. With AI, it can look through these massive dumps of data and determine that, for example, 60% of the time, when you pair a particular CPT code with a particular diagnosis code, it gets denied, you get short paid, or there is some other negative result. AI also notices the other 40% of the time that when this CPT code is paired with this different diagnosis code, you experience no denial problems and get the full payment. There are engines available where you can drop that data in and, when the engine sees this suspect CPT and diagnosis code pairing, the engine automatically applies the fix to it. These systems can learn from the historical data and apply it to future claims, so we don't need to do as much time-intensive analysis and manual work.

That brings me to the third area I want to highlight: the huge umbrella concept of automation. This is getting increased attention in part because of the staff shortage ASCs and most businesses and industries are currently experiencing. We're all looking to "do more with less." We want to find the areas in which automation can replace manual tasks.

There are so many ways that you can bring automation into a surgery center, such as automated phone calls and reminders to patients. I'd rather have a nurse nursing than making phone calls. Then there's data importing. That can be patient data or data from an ASC's other customer: surgeons. During my presentation, I talked about where we're seeing opportunities around automation, which was a common theme among vendors in the conference exhibit hall. A lot of them are offering solutions to turn what was a manual effort into something that can be partially or fully automated. We're seeing everything from the simplest processes, like importing patient benefits to the most complicated process, like a robot putting supplies away. This is all under that exciting umbrella of automation.