No Winning the Waiting Game: 7 Quotes That Explain Why ASCs Need EHRs 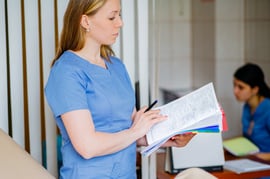 Many ASCs continue to rely upon paper medical records, but with each passing year, the decision not to move to an electronic health records system (EHR) puts surgery centers at a disadvantage in many areas.

There's a good probability that staff, anesthesia providers, and surgeons who have entered the workforce in recent years never learned how to document on paper. In addition, healthcare professionals looking for new jobs are likely to be coming from facilities using EHRs. Requiring them to document on paper may make joining your ASC's team less appealing. In addition, if documenting on paper is unfamiliar and/or uncomfortable, you are more likely to encounter poor handwriting and other documentation completion challenges that can create risk and liability issues.

Electronic solutions are the norm in most industries, and consumers increasingly expect that they will be able to complete documentation requirements electronically. Asking patients who prefer electronic documentation to fill out paper records not only introduces potential challenges for your ASC (e.g., illegible handwriting, lost documents, incomplete documents), but patients may find the experience frustrating and think less positively about their experience with your ASC (more on this below).

The use of paper and a pen/pencil is increasingly viewed as antiquated. If you're asking patients to document on paper, consider how that experience may shape their expectations of the care they will receive and the technology — or lack thereof — that will support it.

It was in 2009 that, as part of the Health Information Technology for Economic and Clinical Health (HITECH) Act, the federal government set aside billions of dollars to encourage hospitals and other providers to adopt EHRs. Since then, EHRs have become commonplace in hospitals and physician practices, with the federal government reporting that, as of 2017, across all hospital types, more than 95% were using certified EHR technology while, as of 2019, about 9 in 10 office-based physicians were using an EHR.

While many healthcare professionals initially resisted moving away from documenting on paper, most have now grown accustomed to and appreciate the conveniences and efficiencies associated with electronic documentation. Getting most physicians and staff to use an EHR is not the uphill battle it once was.

Data and electronic information are taking on a more important role in healthcare and within the ASC industry. Everything from forecasting and managing costs, to improving inventory management, to securing and negotiating payer contracts, to taking advantage of bundling opportunities, to migrating higher acuity cases, to achieving accreditation are increasingly reliant upon producing and often sharing data. Anything that makes it more difficult and time-consuming to gather and analyze data is likely to hinder growth and improvement efforts.

6. "You can only improve what you can measure."

Variations of this quote are often attributed to management expert Peter Drucker. What is being suggested here is that the ability to effectively measure something is essential to bringing about tangible improvements. And that's often the case for ASCs. Benchmarking — internal and external — plays a crucial role in helping surgery centers assess their performance, identify potential opportunities for positive changes, and then reassess their performance to determine whether desired changes were achieved.

Effective benchmarking hinges upon gathering and assessing accurate data, as does performing quality assurance and performance improvement (QAPI) studies. As Daren Smith, director of ASC solutions for SIS, wrote in ASC Focus magazine, "It is difficult to confidently state whether there is truly a problem without evidence, i.e., data, and difficult to claim improvement has been achieved without evidence."

7. "I'll move when the government makes me."

After the HITECH Act was signed into law, there was speculation that it was only a matter of time before ASCs would find themselves required to use EHRs to receive incentive payments or avoid penalties. That mandate never came, and all signs indicate that no mandate for ASCs to switch to electronic records is coming from the federal government.